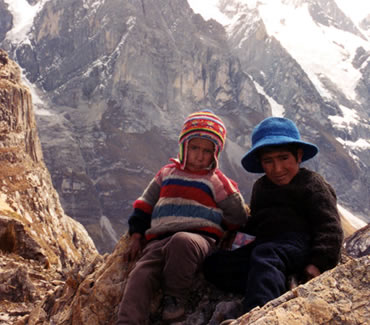 Peru is a land of contrasts. Famous for its biodiversity and its complex geography, it is the third largest country in South America after Brazil and Argentina. Peru is renowned for its mountains, beaches, jungles, and Inca landscapes. It is a land of color and beauty where the past lives. For adventure travel and adventure sports (trekking and mountaineering) it rivals the Himalayas. Peru can boast of being home to both the highest tropical mountain range in the world, the Cordillera Blanca, and to one of the world’s greatest trekking destinations, the Cordillera Huayhuash. The two mountain ranges are located close to one another in the northern half of the country. Other important Peruvian ranges include: the Cordillera Raura which runs alongside the Cordillera Huayhuash, the Cordillera Central east of Lima, the Cordillera Vilcanota in the department of Cusco, and the Cordilleras Volcanica, and Chila which are to be found in the south of Peru.

All international flights arrive in Peru’s capital Lima via the Jorge Chavez International Airport. From Lima you can find transportation to any other part of the country. To access the Cordilleras Blanca and Huayhuash the most popular option is to take a bus to the city of Huaraz, which is the most convenient place to organize treks and climbs.

The weather varies considerably depending upon where you go. Peru has three distinct climate zones.

The mountain region: In the Peruvian Andes, the seasons are reversed. From November to April is considered the winter, with daytime temperatures between 10 and 13°C that drop at night to between 5 and 8°C. The days during this season are cloudy in the mornings, with rain in the afternoons, and snow in the mountains. The dry season in the mountains runs from April to September/October, and is commonly called the Andean Summer. During this season in the highlands above 3500m the daytime temperatures vary between 10 and 18°C. The weather during these months is typically very stable making it the ideal time of year in this region for adventure travel. The freezing level in the mountains is about 4500–5000m.
The Jungle: The seasons are the same as in the mountain regions, but in the dry season it gets very hot with average temperatures between 23 and 32°C. Nights especially in June and July the temperature can drop down to 8 or 10°C.

Lima is the capital of Peru and is located on the coast at sea level. It is by far the biggest city in Peru, and serves as the starting off point for travel to all the tourist destinations, mostly because it’s where Peru’s most important airport, government offices, embassies, hotels, etc. are located.

Electric current: 220 V. Appliances using 110 V. will require a transformer.
Local time: The time difference between Peru and Greenwich Meridian is five or six hours, depending on the time of year: The time in Peru remains the same throughout the year.
Telephone: To make an international call: dial 00 + country code + city code + telephone number. To call between cities in Peru: dial 0 + city code + telephone number.
For more information about Peru, visit: www.peru.info