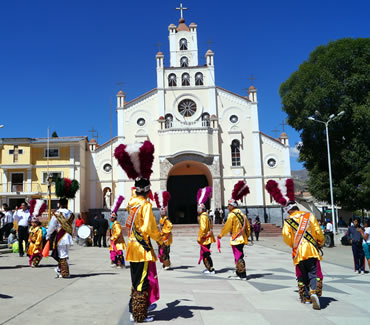 Situated at 3090m at the southern end of the Callejon de Huaylas on the banks of the Santa River between the Cordillera Blanca and the Cordillera Negra, Huaraz is a typical modern Andean city and makes an ideal base from which to organize adventures in the Cordilleras Blanca, Huayhuash, and Raura, and also for shorter excursions around the Callejon de Huaylas and the Callejon de Conchucos. Huaraz is the capital of the Department of Ancash. It has a well developed tourist infrastructure, high quality hotels, international and local restaurants, banks, discos, internet, coffee houses, laundry services, etc. It is the ideal place to acclimatize before departing on adventures at even higher altitudes.

Lima – Pativilca – Huaraz: This is the most common route. It is 404 Km long on a road that is paved all the way from Lima, and takes approximately 8 hours on an interprovincial bus.
Lima – Casma – Huaraz: An alternative route of 519km is to travel via the town of Casma, which is reached by continuing north from Pativilca.
Trujillo – Chimbote – Huallanca – Huaraz: If you are coming from the north, from Trujillo for example, there is an interesting route via the city of Chimbote, which follows the route of the Santa river and passes through 30 tunnels in the Canyon del Pato. The distance is 367km.

For the time being the flights to Huaraz is suspended.

Climate: Huaraz and the Cordillera Blanca enjoy a “tropical” warm climate. The months between November and the beginning of April are considered to be the rainy season with temperatures ranging from 20-25°C centigrade. The months of May through September are the "Andean Summer". This is the best time to visit, it can be a little colder (approx. 10-20°C), but there is very little rain.