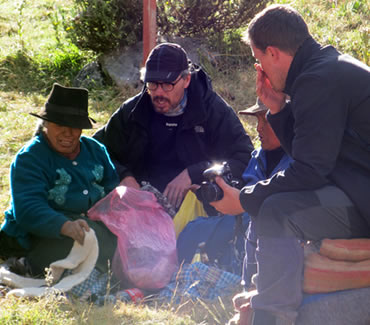 The Cordillera Huayhuash straddles the borders of three Peruvian departments, Ancash, Huanuco, and Lima. It lies in the Peruvian Andes 50km southeast of the Cordillera Blanca and contains part or all of the campasino communities: Queropalca, Quisuarcancha, Tupac Amaru (Department of Huanuco) , Uramaza, Huayllapa (Department of Lima), Pacllón and Llámac (Department of Ancash).
The Cordillera Huayhuash is designated a national reserve and is open to the public all year. Each region is managed by a corresponding community, and each community charges a separate entrance fee in the camping areas located near their villages. Here is a list of the current fees:

* The fees are in Soles (Peruvian currency).

Also there is charge of S/.2.00 per each pack animal (donkey, horse or mule), per night for consumption of grass.

In some of the campsites, as an extra service, which is included in the fees, are people who work as camp guards. In the Huayhuash campsite in particular, there are two night guards who patrol the camp, and then in the morning accompany you to the border of the next community, which is very helpful. Also, at many of the campsites they have dug latrines.