Testimonials, what our clients are saying about us

We are constantly receiving testimonial from satisfied clients, as you also can see in TripAdvisor. 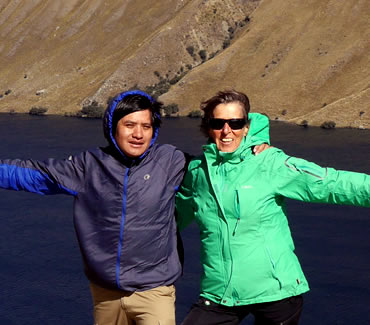 Dear Christian, many thanks for the wonderful trekking tour ' Cedros - alpamayo trek + Pisco mountain climbing
(Aug. 1rst - Aug. 19th 2014). The organization was perfect. There was always someone to pick me up at the airport, bring me to the hotel, to the bus station (Cruz de Sur) to Huaraz etc. The tour to Chavin was great, as well the hike around Wilka cocha. Everything was well prepared for the trekking. The equipment (tents as well as the kitchen tent) very good. My cook, ariero and the guide were very nice. The camp sites were wonderful, nice, quiet and afar from the normal trekking routes. Normally we walked 5 - 6 hours to the next camp site.

The planning for Nevado Pisco was perfect. The mountain is no problem, but the moraines.
We stayed one night at the Moraine camp,my guide an I started walking at 2.00 in the night and reached the top at 6.00 in the morning. The sun was rising!! Perfect, 360° panorama.

I'm happy that I could do this trek, thanks to all the nice people!! Gisela Behrndt 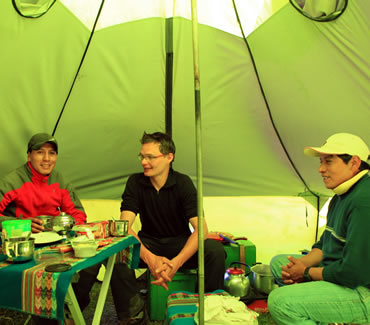 Matthias and I started the preparations for Peru already in December last year. Beside Go2Andes we contacted in the beginning also other agencies, but though the offers were quite similar, we decided very soon to stay with Christian, because it was “something” in his way of answering our questions that made us trust him and think we were in good hand. We appreciated not only the precise way he answered our questions, but also the fact that he didn’t act like a marketer trying to push the client into buying more.

There were three particular moments where I have appreciated Christian’s character. First, when he came to greet us at the guesthouse were we stayed in Huaraz, discussed with us the trek and requested to see every piece of equipment in order to be sure that we are well equipped for the trek.

And here comes the third moment, which confirmed us that Christian was a good decision. We were not happy at all with the guide which came with us on the third trek. I wanted not only someone to show me the way (which, by the way was not that difficult to find) but also tell me something about the region, its culture, its people, etc. and to help me communicate with the other members of the team: the cook and the arriero. But this guide’s English was extremely basic. So I called Christian and I said I wish another guide for Huayhuash. I didn’t expect that it will work, that Christian would be able to find somebody on such short notice and I was really sure, that he will try to make me change my mind. None of this. Christian said just that: “I will meet you this afternoon at the guesthouse and I will try to find another guide”. And so we met later in the afternoon Nestor, who was the best guide I could have imagined. I am very grateful to Christian for this!

As a hobby photographer I need very much time when I go hiking in the mountains. Nestor had immense patience and could tell me very often when is better to go further, because better spots are coming, and which spots are better for sunrise, which for sunset. If I am pleased with the photos I made (see more under http://caterinamrenes.com/tourenberichte/), then also due Nestor’s patience and friendly way.

Our special thanks go also to Pablo, the cook, who not only cooked delicious meals, but also kept his “kitchen” very clean and washed everything with intense care. He accompanied us also to the climbing tours in Cordillera Blanca. Edwin, our guide for Blanca, was a very experienced guide and a pleasant person.

We are grateful to Christian, first because he was trustworthy and reliable and second because he found for us experienced teams, with very helpful and friendly people. Not only Nestor, Pablo and Edwin but also Guzman (the arriero for Huayhuash) and Natividad (the porter for Blanca) did more than it was really necessary in order to contribute to our feeling well and happy. The memories of our vacation in Peru will stay very long with us and we hope to go there again one day. 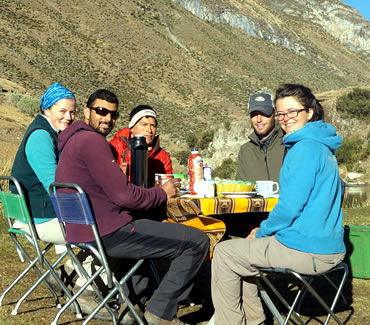 In September 2013 we completed the Cordillera Huayhuash circuit over 12 days with the Huaraz based, family operated company Go2Andes. The scenery on the circuit is nothing short of spectacular, this is complemented by the wonderful service of this company. The trekking guide for our trip was UIMLA certified, spoke good conversational English and answered all questions we had regarding landscape, nature and culture, particularly Quechua culture, both enthusiastically and informatively. All staff were well equipped with warm clothing and good footwear to meet the weather conditions of the Andes and the donkeys that were used on our trip were also really well looked after and well fed (something I consider important on such trips).

Ours was a small group tour (4 people) and this allowed us to bond well with each other and the Go2Andes staff. We had a seamless arrival in Lima where we were met by a driver and taken to a nice hotel to overnight before travelling to Huaraz by Cruz del Sur first class bus service. We spent two days doing acclimatisation day walks around Huaraz (Churrup Lake and a short walk in Cordillera Negro) before commencing our 12 day trek.

The food and service during the trek was exceptional with nourishing and delicious meals served throughout the day. I highly recommend this great, professionally operated family company, we had a fantastic trip that was both a great exposure to nature and culture. The company was flexible and tailored the trip to our needs, allowing us to add a summit of Diablo Mudo to our Cordillera Huayhuash Circuit.

The trip culminated with a pachamanca feast (traditional Peruvian earthen oven which cooks chicken, lamb potatoes, carrots, sweet pototatoes etc) with the families of the donkey men and cook. It was a great to meet their family and a wonderful end to an unforgettable trek!

We will definitely use this company again for our next trip to the Andes! 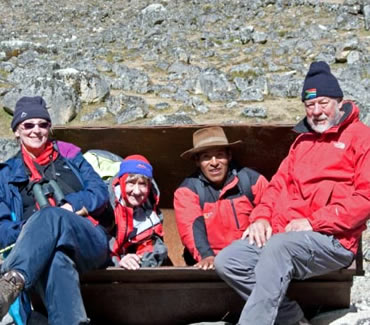 We are a group of 3 friends from South Africa, experienced trekkers and mountaineers. In July 2013 we completed the 12-day Huayhuash trek. Our trek was organized for us by Christian Alvarado of Go2Andes Travel and Tours.

The trip was a success, perhaps not every minute was what one might describe as ‘enjoyable’, perhaps we could have done with a bit less snow and sleet, but that is the nature of long treks though high mountains. We all agreed that we would recommend the trek, and, more importantly, recommend Go2Andes, to any keen folk who are thinking of doing it. 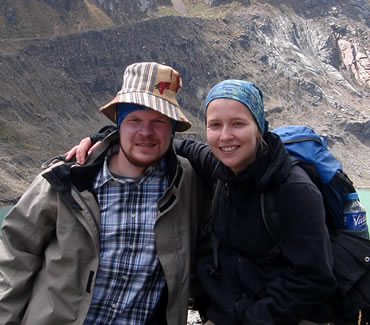 Planning our first trekking trip ever it was very important to us going to Huayhuash with a reliable agency.
After the first email contact with Christian we got a good feeling because all our questions were answered immediately and detailed.
Our good feeling was confirmed when we arrived in Peru as everything was organized very well ( which is not that common in Peru ;) ).
The days in the mountain were overwhelming. We had been a little worried because of the altitude and the daily challenges. But after two days of acclimatization around Huaraz we were ready to enjoy Huayhuash.
What made the experience even more special was our guide Gladys who not only guided us safely through the mountains but also shared her impressive knowledge about peruvian plants, animals and history. She also motivated us to do some "short hikes" in the afternoon ;)
Fortunately we were always provided with a lot of great food from Amancio. It was impressive what he was able to prepare on a small gas stove. Another team member was José, the donkey driver. All three of them made sure that everything of the daily routine worked perfectly well and also shared with us some funny, scary and exciting stories about the Huayhuash.

All in all it was an unforgettable trip and we would like to thank go2Andes for making this possible. 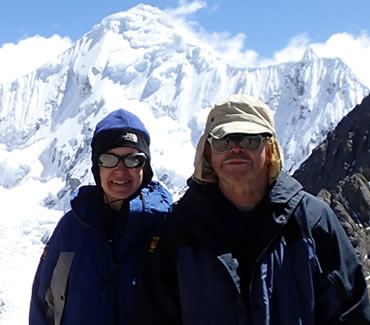 As seasoned climbers and hill walkers - but novices in high-altitude mountaineering - we embarked on the Cordillera Huayhuash circuit with great expectations – and some trepidation; what if one of us became ill during the circuit? Christian Alvarado of Go2Andes organised the logistics from start to finish, reassured us however with his detailed and comprehensive preparation, including essential acclimatisation days before and an emergency horse during the trek. Checking our health and gear beforehand, he kept abreast of what was happening in the region. An unexpected strike meant that our departure from Huaraz turned into an overnight escape to avoid road blocks the next day – but all the logistics, including an extra night’s accommodation, were re-arranged swiftly to avoid curtailing the trip.

The circuit itself was breathtaking (in many different ways); the scenery was awesome with its soaring peaks, groaning glaciers that broke into smithereens, plunging down into deep turquoise lakes, and unexpected, sweeping views after reaching each pass. Condors swerved above (anticipating some potential fresh foreign cadavers), but thanks to Christian’s immaculate planning, pacing and patience, we completed the circuit without any adverse effects. We were extremely well looked after by all the team, including Amanzio who prepared the most amazing, colourful meals (for example pancakes for breakfast one snowy morning and freshly fished trout). Meanwhile Manzueto, the horse man, ran the extra mile to gather the pack animals every morning. In addition to providing expert mountaineering guidance, they explained to us what was happening in the region, adding a whole new dimension to the expedition. We returned home to Scotland, feeling invigorated and enriched by this tremendous experience –thanks a million to Go2Andes and all the team! 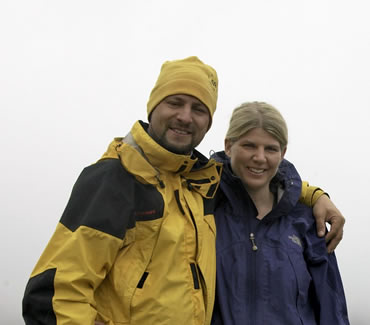 Back home in Germany we rember the Huayhuash tour as one of our most exciting and best trecking tours. We did a 8-day trip from Cuartelhuain to Llamac starting from September, 1st in 2010. We conducted the tour with Huayhuash.com - the organization by Christian was qualified, at all times highly reliable and the rental equipment was in good condition. All members of the team did a fantastic job starting from our guide Angel, who is extremely experienced, humorous and knew the area very well. Amancio is a great cook and prepared tasty and high quality food for the whole crew. The arriero José was highly committed and really helped us with all our equipment. Last but not least Senia, the assistant cook, was a valuable support and team member.
We want to say thank you to the whole crew and will keep the trip in our best memories.
Barbara and Matthias 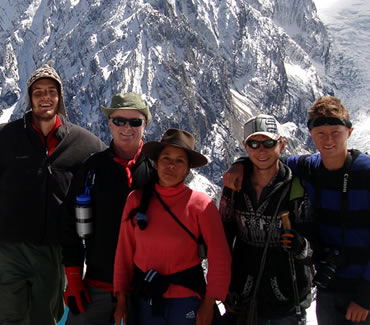 I have trekked throughout most of the world, including India, Africa, Pakistan and other parts of South America. I took my two sons to Peru and trekked around Huayhuash with huayhuash.com. This was one of the best trekking tours I have ever been on. The food, the equipment, the guides and overall professionalism were second to none.
Christian did a fantastic job organizing the trip, from meeting us at the airport to saying goodbye when we left. I wouldn't hesitate to recommend Christian and Huayhuash.com to anyone interested in traveling in that region...in fact, I already have.

So Christian, thanks again for everything.
Michael Shackleton