Plan your trip with local specialists 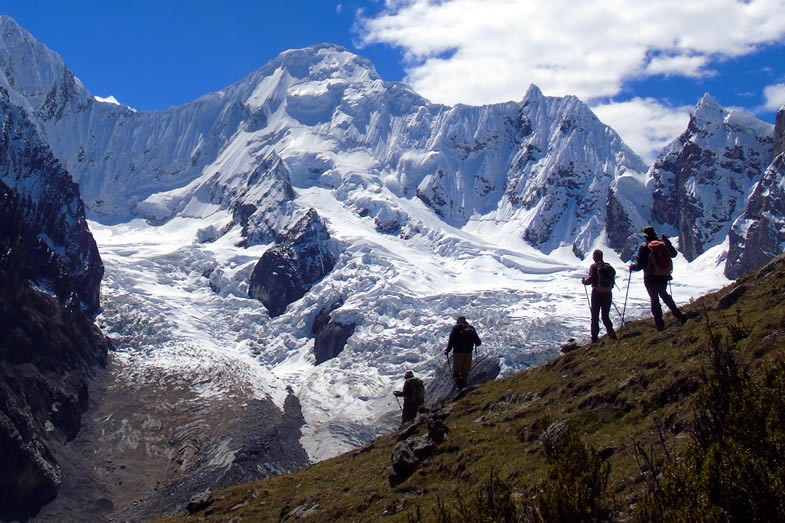 Going down from San Antonio pass to Cutatambo campsite

Considered by many adventure and nature lovers, as one of the most spectacular trekking circuits in the Andes. It goes all over whole the Cordillera Huayhuash in 12 days, crossing passes between 4600m and 5000m, camping near to the lakes located under the snow-covered peaks, following trails that take us to viewpoints from where the views of the landscapes are even more impressive, visiting legendary places such as the base camp of Siulá Grande mountain, well known because here took place the epic mountaineering story of Joe Simpson 'Touching the void'; besides observing the daily activities of the settlers who live in the mountain chain; as well as the great diversity of flora and fauna that we find in this region. 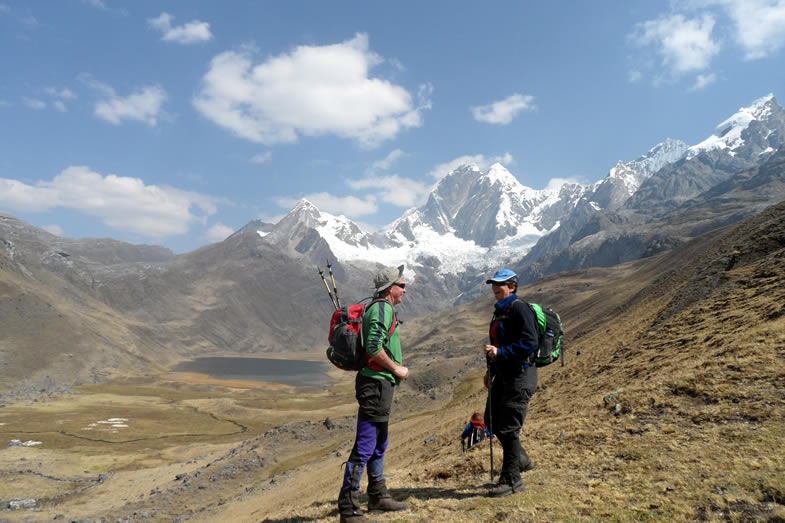 At indicated time, pick up in the hotel and transfer to Cuartelwain 4150 m / 13 615 ft, we arrive there after of 5 hours. This will be our first camp.

After breakfast, we start walk up to Qaqanan pass 4700 m / 15 419 ft, we get to the pass after of 3 hours; then we go down to the East side of Cordillera Huayhuash, after to have walked 2 hours more we get to the next campsite on the shores of Mitucocha lake 4250 m / 13 944 ft; below of Hirishanca and Rondoy mounts. 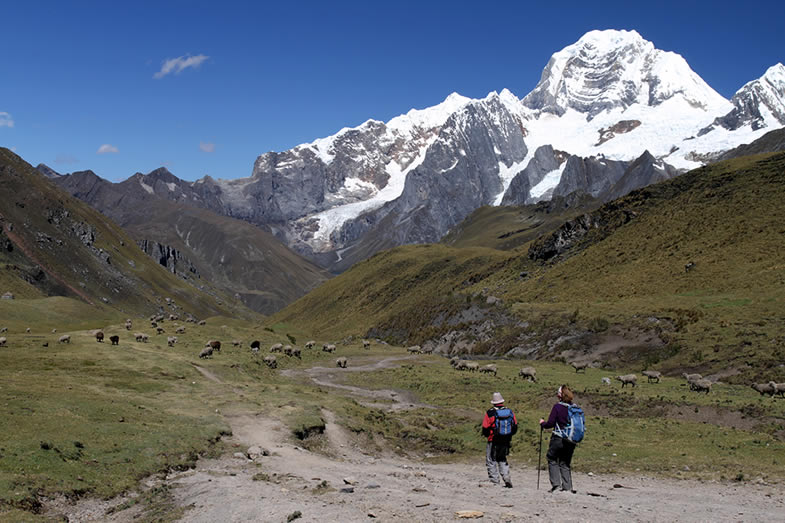 Descending from Carhuac pass to Carhuacocha

This day we depart early for Siula pass 4850 m / 15912 ft, we walk along the shores of Carhuacocha lake, on the way we visit Three lakes (Qanrajancacocha, Siulacocha and Quesillococha), we always will have the view of Hirishanca chico, Yerupaja and Siula mounts; after of 4 hours we reach the pass, from this point we have a panorama of the most snow covered peaks of East side of Cordillera Huayhuash specially of Siula mountain. After resting and having taken the photos we walk down to Huayhuash campsite 4300m / 14 108 ft, where arrive after of 3 hours more. 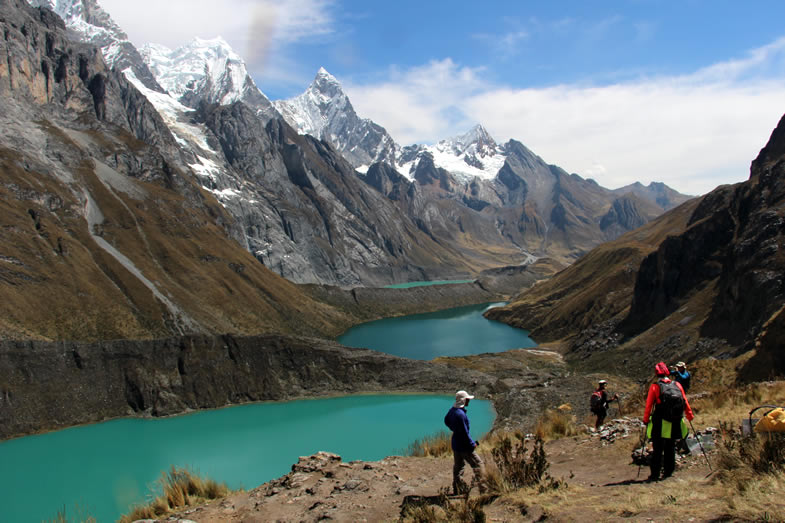 At indicated time after breakfast we depart for Portachuelo pass 4750 m / 15 584 ft, we get to the pass after of 2 hours, this pass is the boundary between the Cordillera Huayhuash and the Cordillera Raura; from the oass we walk down among Ichus (grass plant that lives over 4000 m / 13 123 ft in the Andes), on the way is possible to see llamas and alpacas (Andean camels); we pass near to Viconga lake and we get to our campsite after of 2 hours more, our campsite will be located at 4400 m / 14 436 ft, near to the hot springs.

We head to the highest pass, Cuyoc 5000 m / 16 4040 ft, we get there after of 3 hours, this pass is located between Cuyoc and Pumarinri mounts, from this point we have nice views of Cordillera Raura and part of Cordillera Huayhuash too. From the pass we descend to Guanacpatay valley and we set our campsite at 4400 m / 14 436 ft, after to have walked down around 1.5 hours. 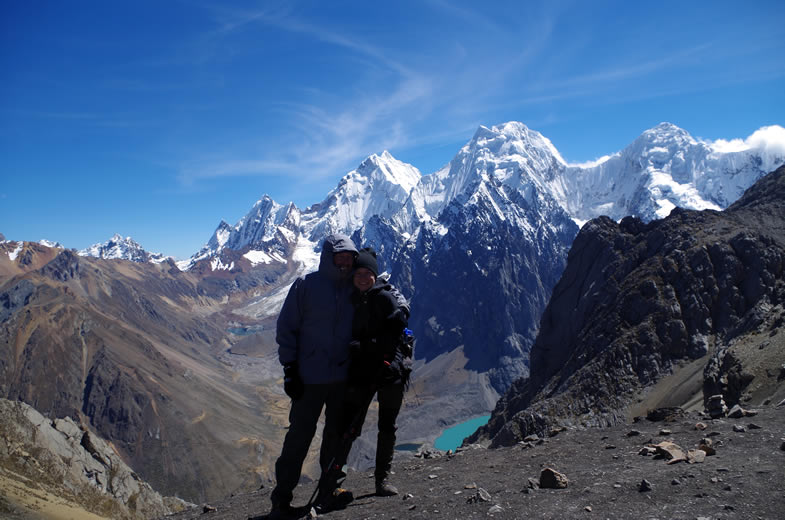 After breakfast we depart for San Antonio, a viewpoint located at 5000 m / 16 404 ft, we get to that point after of 2.5 hours, this point is unique, because from there we have the nicest views of Carnicero, Jurao, Siula Grande and Yerupaja mounts as well as Jurao and Siulacocha lakes. After resting and having taken the photos, we go down to Cutatambo valley 4250m / 13 944 ft, our next campsite where we get there after of 2 hours more.

Day 8: Cutatambo, visit the base camp and glaciar of Siula Grande mount, route of Joe Simpson.

This day we depart for Gran Vista viewpoint 5000 m / 16 404 ft; on the way we visit the base camp and glacier of Siula Grande mount, made famous by Joe Sympson in his book “Touching the void”, and later made ​​into a film with the same name; we get to the viewpoint in 4 hours walking, after to have seen very close the famous mountain, walked around the lake near to the glacier and having taken the photos we return for the same path to the campsite.

At indicated time after breakfast we depart for Huayllapa village 3500 m / 11 483 ft, we take the path near to the river and walk down for around 3.5 hours through the valley of the same name among native trees and shrubs of the region, getting in Huayllapa we can get some sodas and beers. 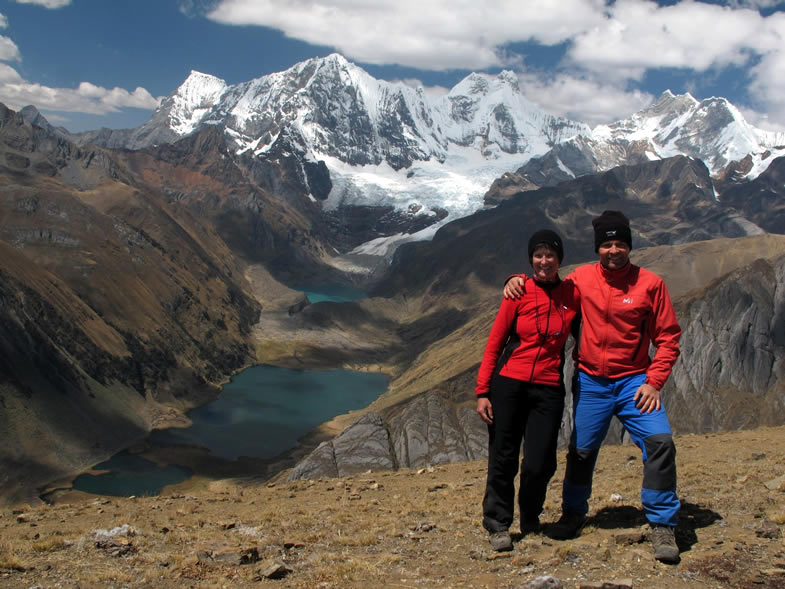 West side of Cordillera Huayhuash, below Jahaucocha lake

From Huayllapa village we depart for Tapush pass 4800 m / 15 748 ft, we get there after walking around 3.5 hours, from this pass we can see some a part of Cordillera Blanca (Tuco mountain), after a break we go down to Qashpapampa 4500 m / 14 764 ft, located below Diablo Mudo mount, many times used as base camp to climb the mentioned peak, we get to the campsite after of 2 hours more.

At indicated time after breakfast we depart for Yahucha pass 4800 m / 15 748 ft, we get there after of 2.5 hours, from this pass we have a spectacular view of the West side of Cordillera Huayhuash, among the snow covered peaks to see are: Ninashanca, Hirishanca, Yerupaja Chico, Yerupaja 6634 m / 21 765ft (the second highest peak of Peru after of Huascaran 6768m / 22 205 ft), Rasac, etc. After restinh and having taken photos we go down by Huacrish valley to Jahuacocha lake 4070m / 13 353 ft, we get there after of 2.5 hours more. Our tents will be set up near to the shores of Jahuacocha lake, having an impressive view of the mounts of this part of the mountain range.

Last trekking day, we depart for Pampa Llamac pass 4300m / 14 108 ft, we get there after of 3 hours, Pampa Llámac is the last viewpoint of the Huayhuash circuit, from this place we can see by last time very close the mounts of Cordillera Huayhuash; after we descend to Llamac village 3300 m / 10827 ft, in of 2 hours more. In Llamac a car will wait for us to take back us to Huaraz city.

• It is also possible to have rest days in Carhuacocha and/or Jahuacocha where you can walk around the lakes to do some fishing. Another option for those in search of more extreme adventure is to organize a climb of Pumarinri (5465m) or Diablo Mudo (5350m). These are two moderate peaks that can be climbed with just one extra day. If you are interested you’ll need to bring basic mountaineering equipment along with you (climbing boots, crampons, ice axe, harness, and rope) and a mountain guide. 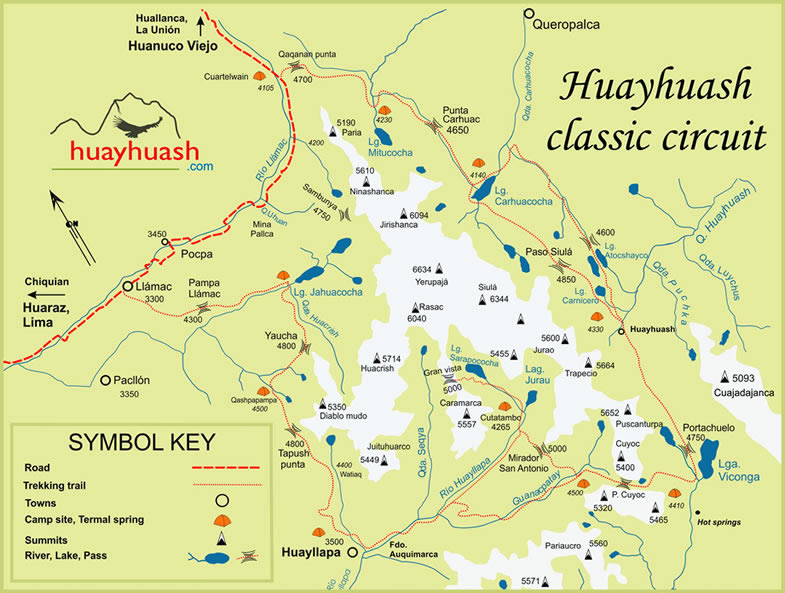 Huayhuash circuit: elevation gain and loss of the 12 day trek

How difficult is this trek?

The 12-day trek is considered the most difficult of all the routes that there are in the Cordillera Huayhuash, due to the fact that it is carried out in places above four thousand meters and almost every day cross passes above 4600 m / 15091 ft, even some days we reach up to 5000 m; It is well known that in high places the level of oxygen is lower, so breathing becomes quite slow and one gets tired easily; so it is recommended to be in good physical condition and train before coming. Regarding the trail in most of the route is wide, it is the same used by pack animals (donkeys, horses and llamas); except for some shortcuts which lead us to viewpoints that few know and offer us more interesting views, which are not very marked.

The best season for the 12-day trek is from May, which is the month when the dry season begins until the end of September; because the first days of October fall the first rains; even during the months of the dry season (May - September), we have some rainy days, but in general, during the full 12-day journey, it is not normal that the bad weather exceed 2 days, so it is recommended always to carry the waterproof clothing.

It will depend on the way you want to make this circuit, if you are going to be part of a guided tour with a travel agency, we recommend you read our list of recommended equipment; otherwise, if the hiking is going to be carried out independently, to the suggest list you must to add tent, stove, kitchen utensils and everything necessary to camp in remote areas.

There are two factors that are very important to make this trek, one is to be in good physical condition and the other acclimation; it is recommended before leaving for this destination to spend at least 2 days in places above 3000m; usually the departure point for this trek is Huaraz city; from here there are many options to make day trips for that purpose. For those who have in mind to visit Cusco, Machu Picchu or another destination located above 3000 m / 9844 ft, they are recommended to start for those destinations because it will serve as acclimatization to make after the Cordillera Huayhuash circuit.

The trekking route that we call as the classic circuit, is the one that runs through most of the Cordillera, that implies that we visit more areas managed by the communities settled along the mountain range; the payment made to the communities by use of the campsites and visit their territories vary from 15 to 50 soles, in the 12 day trek every passenger must to pay 220.00 Peruvian Soles. 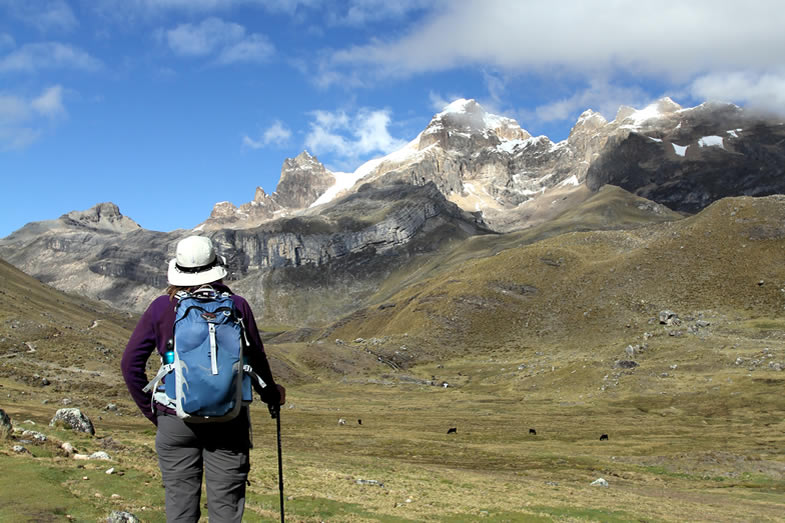 As the area to visit is remote, it is recommended to take a guided tour, since in those tours there will always be a Trekking Guide who knows very well the place and more people in the crew like: Camp Cook, Assistant and Arriero (Horseman), besides transport the equipment and food for 12 days is very difficult, so the use of pack animals (donkeys, horses and llamas) are necessary. The fact to be part of a guided tour allows to the passenger dedicate just to walk and enjoy the views, because he/she will have everything arranged during the trekking days, the meals will be prepared, the tents will be set up and set down by the crew; in the case of emergency the Trekking Guide arranges everything to evacuate if the problem is serious with a member of the party.

For people who want to do independently, of course they can do it, there is no restriction; but they must come prepared and have experience in multi-day treks; they can organize it in their own way, by carrying their luggage themselves or by hiring at least one Horseman and some pack animals to help with the luggage.

Until 2005 some incidents were reported, some of them serious, where groups of thieves in their desire to steal the belongings of tourists killed some of them; thereafter, the village communities began to administer the territories that correspond to them, they were organized to take care of and also charge in their respective areas; from that date until now no serious cases have been reported, except for the loss of some belongings, which some visitors leave outside the tents at night. Of course, it is always necessary to take the precautions, it is recommendable to walk in pairs; because as the area is remote and some paths are narrow, especially those that lead to the viewpoints; you can suffer falls; and the fact of having company will help asking for help, especially for those who do the trek independently.

Climbs and Treks in the Cordillera Huayhuash of Peru

Plan your trip with local specialists